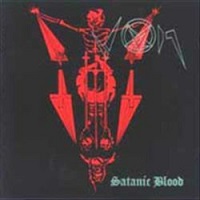 There’s always a race – albeit sometimes pointless – to determine who’s first. As in, who was the first death metal band? Death or Possessed? Thrash metal: Did Accept start it by way of “Fast As A Shark” or was it one of the Bay Area bands? Power metal: Did it start with Maiden or Manowar, or early Helloween? That’s generally one of the good problems we have on our hands with metal, for these topics stir endless debate.

Considered by many to be the first American black metal band, Von at the time of their 1987 formation, had no peers. They were essentially stuck in the middle of thrash and nascent death metal, with only their Scandinavian brethren to look to. As the 80’s ducked out and the 90’s started to take form, Von were crucial in the development of the second wave of black metal, along with Mayhem, Darkthrone, Emperor, and so forth. The band would call it a day in 1992, only adding to their legend (Cannibal Corpse’s Alex Webster would routinely don one of their shirts). Von would go on to reform in 2010, spearheading the release of their first official album, Satanic Blood.

Apparently, the tunes are from 1992, but recorded in 2012 to sound like it’s 1992. It’s a reverse parallel, as most bands take their early works and beef them up with modern production protocol. Suffice it to say, Satanic Blood is wholly crappy in the production department, thus giving the band’s primitive BM bashings the necessary aura and feel to appeal to old-timers. The songs are pretty mediocre, to be frank, as vocals are grunted in one-word syllables, the same “evil” melody is repeated more than once, and the compositions are a mess. That won’t stop the “troo” crowd from going gonzo over “Devil Pig,” “Goat Christ,” and “Watain,” though.

The forgotten element in Satanic Blood is that these songs were once available via demo only, so now the mystique and collectability is gone. Beyond that,Satanic Blood is sloppy, beginner’s-level black metal. If you’re looking for the proper take on early black metal in this vein, look to Rotting Christ’s immaculateThy Mighty Contract.