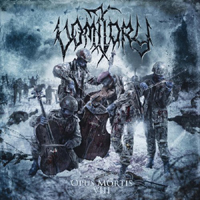 Sweden’s Vomitory serve a purpose for the death metal monger who wants a certain, distinct sound to his or her favorite artist – and rarely strays from said formula. In the case of Opus Mortis VIII, that means Tobias Gustaffson’s rapid fire-blast drumming, guitarists Peter Ostlund and Urban Gustaffson dicing your eardrums with low-tuned riff rage and soloing and the undeniable evil scorching throat bombs from bassist/vocalist Erik Rundqvist.

It appears 22 years into their career, the band feel comfortable shifting from mid-tempo, more Chaos A.D.Sepultura-meets-Grave material like “The Dead Awaken” and “Bloodstained” into the chaotic frenetic ball busting speed numbers like “Torturous Ingenious” and “Forever Damned.”

Aspects I enjoy about this eighth full length include the rumbling bass that signaled the start of madness for “Regorge in the Morgue” and the foreboding sense of gloom mirroring the words of “Hate In a Time of War.” The solos possess that free for all looseness one expects from Slayer, and it’s a shame as Vomitory could gain that much more of a distinctive niche if they were willing to really deliver higher quality runs. I have to be in a certain angry mindset to appreciate Vomitory and their straightforward, no-thrills songwriting, much like Impious, where the shorter arrangements and tight play backs keep me from fully disengaging when other death acts draw out their parts.

2002’s Blood Rapture and 2009’s Carnage Euphoria represent the best in this band’s catalog for my money, so understand that Opus Mortis VIII lobs a conventional softball musically that Vomitory and its following know a little too well.