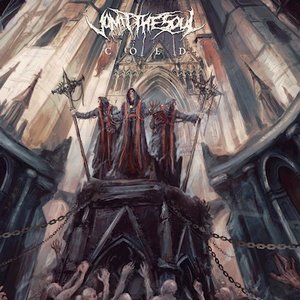 Despite having been around since 2000, Cold is only the third full-length from Italian band Vomit the Soul, and the first that they have released since 2009.  Despite the usual sound of Italian death metal acts, Vomit the Soul isn’t all about the hyperspeed and crazy technicality of some of their fellow countrymen.  Instead, expect brutal death metal served up the American way – lots of groove, heaviness, and absolutely soaked in aggression.

So in some senses, Vomit the Soul have a sound that feels very familiar to those knowledgeable about brutal death metal.  Acts like Disgorge, Devourment, or even some older Dying Fetus/Cannibal Corpse jumps to mind when listening to Cold, and that’s not a bad thing.  Given the genre’s need to revel in excesses sometimes, Vomit the Soul provides an outlet that feels like genuine songwriting (instead of trying to be over-the-top brutal from start to finish), which makes the songs pop.  Of course, there’s lots of groove to take in, and some brutal breakdown-ish sections but it doesn’t make them hit any less hard.  Rolling groove in a song like “Venerable No-One” is strong enough to snap some necks before it finishes.  You also have those overwhelming speed runs that you can get your adrenaline fix from (complete with tin can-ish blasts, for those eager for some real nostalgia) in tracks such as “Irreversible Damnation.”  The vocals are inhuman, but never to the point of silliness, often taking a book from the Dying Fetus chapters on growls, giving a crisp yet gutturally low sound that suits the music to a tee.

Cold may not win much in the originality department, particularly to those who have followed the scene since the late ‘90s/early ‘00s, but most importantly, it’s a fun listen.  The grooves make you want to get up and move about, maybe toss a chair or two, and the adrenaline is sure to last you a solid week or so after listening once.