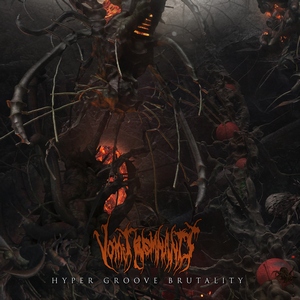 Sometimes your work is cut out for you on a release like Hyper Groove Brutality. The title pretty much tells you exactly what to expect. Of course, some bands blow things out of proportion and leave you disappointed with elevated standards, but such is not the case here. Hyper groove brutality what Vomit Remnants describes, and that’s exactly what you get.

The road hasn’t always been an easy one for the brutal, slamming death metal act, with this being the third go-round in the band’s existence and their sophomore full-length, with 1999’s Supreme Entity being the first effort (with their last release being a 2005 split). Needless to say, it’s been a while since the band has hit the studio, but you wouldn’t know it from the quality that exudes from this album. Those of the Dying Fetus school of metal will undoubtedly flock to this one, because of the repeated and utterly massive grooves (and a few slams too). A hint of technicality also rears its head from time to time in the riff structures (see “Extinction of Worthless Humanity”), making for some even more dazzling grooves to behold. There’s some occasional upticks in speed to keep the affair from becoming too one-dimensional, not to mention some of the more melodic solos that creep in on occasion. Regardless of pacing, it’s an intense and punishing listen that only gives you a few moments to breathe when you are tossed a quick and strange soundbite.

It’s nothing outside the usual groovy death metal onslaught, but considering the band’s extended time away and the slew of high-profile guests on this one (including Paul Masvidal, Craig Peters, and Henrik Cranz) there’s more than ample reason to be excited about Hyper Groove Brutality. The most important thing – album title as it may, the grooves had better deliver, and you better believe they stand up to the high stakes of the claim over repeated listens.