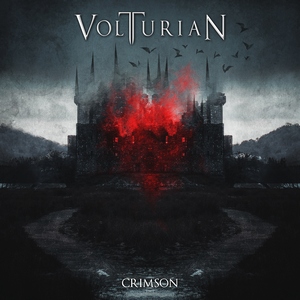 Surely, those hip to the modern melodic metal scene will turn their ears in the direction of Volturian with the mention that it contains members of Italian acts Sleeping Romance (Frederica Lanna) and Frozen Crown (Federico Mondelli). But rather than the symphonic/power metal antics of either of those acts, Volturian switches gears a little bit by moving into more alternative/modern metal territory, with a heavy dose of electronics.

While comparisons to bands like Amaranthe are invevitable with the emphasized and energetic synths and high-charged guitarwork, Volturian also squeezes into more of their own territory as well. This is accomplished by focusing on the heavier end, accompanied by more gothic atmospheres that move in during the gentler moments. The album opens quite triumphantly, with cuts like “Haunting Symphony” and “Broken” utilizing melodic death metal riffing atop poppy synthwork that is bound to stick into your ears after the first few listens. “The Killing Joke” shifts gears with pounding, industrial rhythms that gives the music a dark tone – a perfect juxtaposition with Lanna’s powerful vocals. Something that’s showcased again later with the energetically pulsating “Days Before You Died.”

In a wise move, the band doesn’t give into tossing a ballad on the album, instead driving things forward with every track, even if there are some quiet and memorable moments, such as the build-up on “Between the Sleepers” that pushes into one of the album’s strongest choruses. The softest track would be the closer “Fading Like a Flower,” which is a Roxette cover, and is masterfully done in a way that pays respect to the original while adding plenty of Volturian flair. While not a ballad, it ends the album on a more upbeat and lighter note. There’s not a track to be had that doesn’t want to slip into your mind and make residence there, and that truly is the album’s greatest accomplishment. It’s incredibly catchy, but it’s also well-written in the sense that you will find the initial hooks easily, but with each listen there’s a new track that will stand out because of a guitar melody, vocal line, or even bass work that you may not have picked up on with the first few listens.

Crimson is an all too impressive debut for fans of this type of material. It hits all the right notes – it’s heavy enough to stay grounded in the genre, while bringing in high-flying poppy choruses and electronics that allow it to stand out from their peers. As someone who enjoys this sound quite a bit, it’s also easy to say that this is one of the strongest examples of the genre in recent memory.