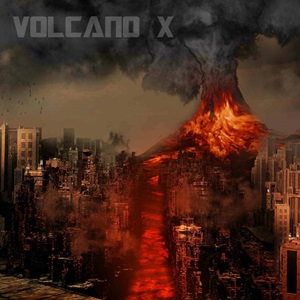 Vanquishing evil and battling mighty demons while forging oversized weapons from molten steel (cheers to bio bravado on social media), Volcano X epitomize a heavy metal attitude and outlook on this six song EP The Eruption. A duo of musicians shared in all the writing and execution responsibilities – Norrie Davison on vocals, bass and drums, while Mike Bell handled guitars while also performing the bass and drums. Together since 2013, this Dundee, Scottish act live for the heads down riff, an easy to grasp chorus, and solid mid-tempo anthem template, which corrals their sound into the 1980’s horizons when Judas Priest, Manowar, and Accept reigned worldwide.

Guitar harmonies abound beyond the lead break sections – making a cultural connection for “Give ‘em the Axe” (not a Lizzy Borden cover by the way) and proving Mike’s melodic sensibilities. An older classic rock nuance for the follow-up “Take the Reins” opens up the upper register for Norrie, his delivery one that may many think of Volbeat’s Michael Poulsen if thrown into a Glenn Danzig cage match. When the band choose to accelerate some of the riffing into gallop-mode, there’s a renewed sense of energy that matching up to the helium range melodies puts “Super Nova” into that Judas Priest meets Megadeth terrain – especially when the latter was hitting their Countdown to Extinction commercial peak.

Where The Eruption could be a tough sell for some on the recording front is in the less than ideal computer programming Mike and Norrie employ for the drum tracks. Obvious limitations come up in certain pattern choices where a human drummer really could have livened up the material – whether it’s in the opening call to arms “This Is Heavy Metal” or the more shape shifting doom to power-oriented “The Philosophy of Futility”. Now that the band is an active quintet for live performances, this hopefully will improve Volcano X’s future recordings to make a bigger impact and be less industrial-cyber sonically that they probably intend.

A decent representation of the group’s ability to write solid traditional heavy metal, The Eruption gives Volcano X room to grow, which they should as the full-lineup gains more traction on the live front.