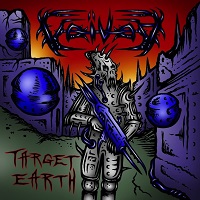 Upon the release of Voivod’s Warriors of Ice live album a few years ago, Blistering spoke highly of freshly-inserted guitarist Dan “Chewy” Mongrain’s handle on Denis “Piggy” D’Amour’s lavish and 100% unique guitar work. Mongrain’s pedigree is in technical death metal, having spent the better part of his career slugging it out in Martyr, a band widely acclaimed in Canadian metal circles. Combine that with the fact he’s a life-long Voivod fan and alas, just reason to record the first posthumous Piggy album, Target Earth.

Target Earth (the band’s whopping 13th album) also marks the recording return of bassist Jean-Yves Theriault, who will be known as “Blacky” from this point forward. The two parties are the straw that stirs the drink here, as Mongrain’s amazing attention to detail (there are some riffs here that Piggy would have had no problem putting down) and Blacky’s blower bass style have given longtime standbys Denis “Snake” Belinger (vocals) and Michel “Away” Langevin a swift kick in the Canadian keister…Target Earth is the direct parallel to aDimension Hatross and Nothingface hybrid.

The primal churn of “Kluskap O Korn” is a great starting point, with Mongrain knitting abstract arrangements with a punch that recalls the band’s underrated mid-80’s era. The ominous tone of “Empathy for the Enemy” draws the most direct line to Nothingface, with Snake getting all multi-faceted on everyone, while lead single “Mechanical Mind” brandishes angular thrash, only in Voivod’s off-center way, as in, the song sounds like it’s the soundtrack to some sort of weird, robotic factory. Songs of similar punch and drive come in the form of “Resistance” and “Kaledios,” which is perhaps the best number of the bunch thanks to Mongrain’s chord couplings and Snake’s wily old croon.

Target Earth stands to hang around much longer than the Katorz and Infinialbums, mainly because a.) the band can actually tour to support it; and b.) they no longer have the cloud of Piggy’s death hanging over them. Either way, what you have here is another inspired, on-the-loose Voivod album that gets better with every passing listen.