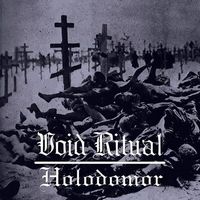 The title of Void Ritual’s Holodomor isn’t as purposely timed as one would think, with this four-song EP seeing digital release in 2013, then physical release in the now. “Holodomor,” for the unaware, is the name of a man-made plague that wiped out two-to-seven million people in Ukraine during the 1930s. So with accompanying cover art, a one-man set up, and the proper influences in tow, Void Ritual (who hail from New Mexico) is very much a legitimate entry into the American black metal sweepstakes.

Lone dude Daniel Jackson has the necessary grip on the riff tactics found in early-to-mid-90s black metal, leaning heavily on Darkthrone and Emperor’s more inspired, less-keyboard (for Emperor) moments. Production is several rungs above basement quality, rivaling that of many of the Cascadian loons still hanging out, groups Jackson is probably to elude from a sonic standpoint. Nevertheless, the blasting “Cold” gets the job done, while occasional (and inviting) melodic segments bloom on “Void Ritual,” and the melancholic “Mourning Dawn.”

Some may find additional substance in the fact that Jackson is doing this alone and he’s from New Mexico. There’s a slight novelty aspect there, one would surmise. Holodomor is of quality, surpassing a lot of the fuzzed-out, incoherent bands of the same nature, while packing familiarized trademarks and excellent musicianship into four songs that have traction.