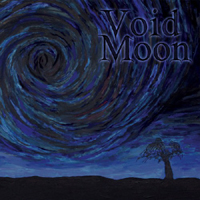 Tradition often overrides progression. It’s an unfortunate reality of the world in which we live, and from a more granular aspect, applies to an album like Void Moon’s On the Blackest of Nights debut. The respected and normally reliable Cruz del Sur banner was an immediate giveaway as to how this one would play out, even in light (no pun intended) of the rather Van Gogh-esque album artwork, which after a few glances, is pretty cool. This is a tepid, lukewarm showing of traditional doom metal crossed with some vintage metal action

, one that is seemingly afraid to let its hair down. Don’t want to rankle the scene police, you know?

Formed in 2009, Void Moon has a handful of demos to their name, the basis in which On the Blackest of Nights exists upon. Reason being, the band re-recorded these songs

, a safe proposition considering the band has lived with these songs for several years. Nevertheless, there’s the practical Black Sabbath riff-spotting present, along with subtle nods to perennial doom underdogs Solitude Aeternus, who might be the best comparison. The primary differentiator, though, is singer Jonas Gustavsson doesn’t hold a candle to Robert Lowe. (If you didn’t get that pun, you have been living under a rock.)

Gustavsson has the emotive and rangy part down, yet he’s hardly convincing. This circles back to Void Moon’s overall presentation, which relies upon listless riffs and played-out melodies, the bulk of which have been used dozens of times since Nightfall made the hair stand up on everyone’s neck. Gustavsson does manage to pull “Cyclops” out of the depths, making the song

a doom-stalker that chases down the night and barks at the moon.

The best example of traditional metal-on-doom done right in 2012 is Hour of 13, a band who proved to be extremely competent in churning out monolithic riffs and aching melodies. Void Moon hasn’t figured this out, going back to our introduction detailing how sticking with tradition can end up biting one in the butt. It did for Void Moon for On the Blackest of Nights, so maybe it’s time they put away their worn-out copies of Epicus and got out of the doom dark ages.