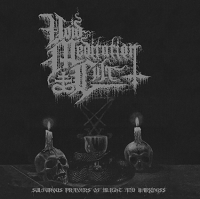 The production on Void Meditation Cult’s Sulfurous Prayers of Blight and Darkness is horrendous. Okay? Certain members of the metal journalism community sometimes have difficulty overlooking such a fact, failing to realize that having a production right out of a boombox in a shoe box is 100% done on purpose. Now, if this were a symphonic power metal release with such a sound, then yeah, gripe away. People forget about context sometimes…

Now that we have that out of the way, some focus could be lent to Void Meditation Cult’s compositions, which are of the grim black metal variety, ala lo-fi Bathory and Sarcofogo. This particular release is the coming together of the band’s 2010 Sulfurous Prayers demo, and their 2009 Blight of Darkness demo, which was recorded when the band went under the Sperm of Antichrist moniker. Regardless, these songs take a deep, deep plunge into the black metal abyss, with cryptic vocal rumblings, sparse guitar lines, and a hypnotic jam by the name of “Rites of the Ruminant Dead,” which is chilling and uneasy.

Black metal message board mongrels generally eat this type of stuff up, for it’s like Xasthur before they got popular, and is reminiscent of black metal’s nascent phase. What Sulfurous Prayers of Blight and Darkness lacks in modern amenities, it makes up for in charm. Void Meditation Cult will no doubt be welcomed with open (and gauntlet-adorned) arms when this enters in the BM realm.