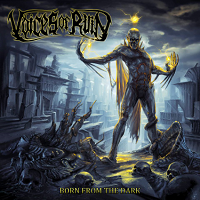 Efforts persist to revive “pure” melodic death metal. And by “pure,” we mean the style’s Gothenburg glory days, which is in the range from 1992 (or so) until the end of that decade. Pop music and/or clean choruses forever altered the way we look at melodic death metal, not to mention hardcore’s unrelenting infatuation with the riff catalogs of At the Gates, Dark Tranquillity, In Flames, et al, so it’s a difficult push, at this juncture, to reset the dial. Here to give it a shot are Southern California scene veterans Voices of Ruin, and their second album, Born of the Dark.

Produced by Scott Fuller (Abysmal Dawn, Annihilated), and garnished by artwork from the ever-busy Per Oloffson (Exodus, Immortal), Born of the Dark certainly looks the part of a signed, savvy band. On cue, the melodic tremors so intrinsic to making this form of metal go are off and running during “The Awakening.” While there’s certainly a strong adherence to the melo-death template, the compositional structure of many of these songs are labyrinthine, particularly “The Black Horizon” and “Death’s Design,” which glides in ever-so gently with a lovely acoustic guitar intro, but then veers into shred territory.

In earnest, some of these songs could use a quick trimming, only because of Voices of Ruin have the necessary tools of the ‘ole trade. They’re sometimes too quick to abandon a good idea (see the mighty peddling at the onset of “Fallen”) in order to get to the next. It’s in these minor hiccups that could keep the band hovering around no-label land for at least a little longer. But beyond that, Born of the Dark is full of promise, and more importantly, achieves its intention of reclaiming these glorious melodic death metal times of yore. 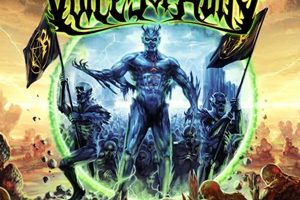