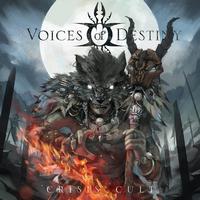 Talk about your fluff-in-a-box (or digital download/stream) of a name, “Voices of Destiny.” Sounds a bit like a theatrical production to the average eye, eh? Or, yet another faceless female-fronted symphonic outfit. Close, but no cigar with that one, for indeed Voices of Destiny employees the standard female frontwoman formation with Ada Fletchner out front, yet the band’s style bounces between the modern and of course, the symphonic, with a couple blase piano ballads thrown in for good measure, making their third album Crisis Cult a non-factor all the way around.

Fletchner suffers from the same indignation as most vocalists at her level do – they do little to separate themselves. Sure, there’s some legitimate flavor found in the bouncy “Wolfpack,” or “To the Slaughter,” but stylistically, there’s not much to be gleaned from her efforts other than she’s there, hanging around, filling space. Male gurgles further boggle the mix, an unfortunate happening that if anything, force Fletchner to do more with less. The band’s ability to at least inject some muscle into their sound helps ease the symphonic burden, yet by no means does Crisis Cult have much of a standout jam.

Oddly, the lone selling point with Crisis Cult may be the guest vocals courtesy of former Xandria siren Manuela Kraler, who helps out on “At the Edge.” Once past that little blip, Crisis Cult formulates itself as a rather rote album, thus re-affirming the notion that bands such as Voices of Destiny need to try a lot harder in all phases to avoid being sucked up by the great metal vacuum cleaner of plainness.