Voice of the Soul – Catacombs (Self Released) 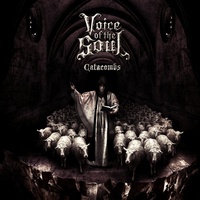 More metal from the Middle East can’t be a bad thing. Only shows how truly universal the metal language can actually be. Voice of the Soul utilizes just a slight bit of their geography to their advantage, which gives them a slight edge in the often tough battle of individuality. The only slight problem with Catacombs is that perhaps the band hasn’t quite found their sound yet.

Overall, Catacombs likes to lean in favor of heavy, mid-tempo riffing as opposed to explosive speed. It’s a formula that can work, and shows Voice of the Soul being a bit more calculating and methodical in their execution. It also can position them closer to a death/doom band than a straight up death metal one at times (see “Images Subside”). After a short atmospheric lead-in, the next two tracks whizz by with their immersive take on death metal. As predicted, there is some atmosphere as well, which may lead some to tag the band as one in the heavier end of the spectrum of melodic death metal. But then the band goes a bit to the left field with the next three tracks. “Quarantine” amps up the synths, and “Cold Rapture” switches things completely over to a more melodic sound with a large increase in clean vocals. “The Mist” provides a rather mellow interlude before “Perdition” brings things back to a sound that was seemingly where the band started with at the beginning of the disc.

While there’s nothing wrong with any of the approaches that Voice of the Soul captures, it leads to an album that is less cohesive than it should be. Once the band decides which way they want to take their sound, Voice of the Soul could end up being a force to be reckoned with.