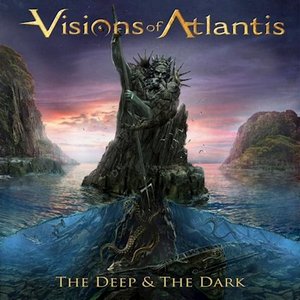 Now that the waters have settled following a number of shifts in membership following 2013’s Ethera, the newest iteration of Visions of Atlantis have worked to return to the older approach of the band. The Old Routes – New Waters EP gave the first glimpse, showcasing new vocalists Clémentine Delauney and Siegfried Samer, but retreading old songs is one thing; new material is something else entirely. But it seems the veteran symphonic act was more than up for the challenge.

The Deep & The Dark honors and returns to the band’s more traditional power/symphonic roots while thrusting them forward into the modern age. Embodying the spirit of adventure, the uplifting series of cuts tends to stick towards the lighter and more bombastic side of the genre, but with enough energy to ensure some heads will still bang, as noted by the triumphant one-two punch of the title track and “Return to Lemuria.” Enriching the diversity of the album are some folky elements (see “Ritual Night”), some straight-forward rocking (“Dead Reckoning”), and an epic length track (“The Silent Mutiny”) that doesn’t shy away from a combination of soaring melodies and guitar theatrics. Of course, an album like this must contain a ballad, but Delauney’s presence on “The Last Home” is utterly bewitching and elevates it above the usual clichés. Speaking of vocals, the duo of Delauney and Samer is one of the album’s true highlights. The pair are an excellent complement to each other, whether it’s at the album’s most bombastic and thundering moments like “The Grand Delusion,” a catchy chorus (“Words of War”), or a more straight-ahead verse made more dynamic by their interplay (“Book of Nature”). Their contrasting voices will frequently deliver a smile to all but the most hardened of metal listeners.

Pleasantly focusing on mostly short and sweet attacks of about 4-minutes, there’s a refreshing directness to the material as well. They never linger on drawing out ‘epic’ by simply extending the time frame, instead filtering each track down to its essence. In turn, making the tracks full of charm and character, leaving you wanting more in the end. While the band follows the usual symphonic metal formulas, the combination of striking melodies, rock-solid guitar heroics, and dynamic vocal-work makes The Deep & The Dark one of the stronger examples of the genre in recent memory. Here’s to more clear sailing from this point on.