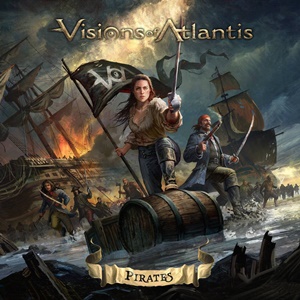 While many musicians stateside have been gravitating towards symphonic/ power metal over the past few years, European acts spearheaded the movement in the late 90’s/early 2000’s. Austria’s Visions of Atlantis are one of those early pioneers, releasing their debut album Eternal Endless Infinity in 2002 and being a steady staple of the Napalm Records roster through its follow-up Cast Away in 2004. For their eighth studio album Pirates, the quintet stride confidently into twelve tracks that transport you to those bygone times, feeling at one on an adventurous journey looking for treasure sailing the aural seas.

The vibrant orchestration/keyboard elements along with sturdy guitar parts allow the dual vocals of Clementine Delauney and Michele Guaitoli to mesmerize separately as well as developing choir passages that encourage unison audience participation. The evolution of an album is inherent through the dynamic pacing track to track – positioning broader arrangements against straightforward, more commercial-oriented outings, the opening double shot of “Pirates Will Return” and “Melancholy Angel” serving up the energy and power of the band’s style quickly and effectively. Special guest Ben Metzner provides flute and bagpipes work on four of the songs – proof that the real instrumentation can convey that extra natural touch for authenticity, as the pan flute action during “In My World” provides that calm start before the power / symphonic standard elements of Visions of Atlantis kick into mid-tempo momentous hooks to hang your cap on. It’s great to hear some bass flexing from Herbert Glos on the Helloween-esque “Mercy”, where Clementine handles some of the smoother melodies to allow Michele to hit more of a higher register in key verses. We can also expect reflective ballads to contrast the bombastic/heavier tracks, “Freedom” more Middle Ages in its calmer atmosphere through the keyboard/orchestration foundational components plus its beautiful background choir vocal passages, while “Heal the Scars” succeeds through the seasoned Clementine-driven vocal melodies that float all over her graceful range.

Fresh off a strong North American tour jaunt opening for Dragonforce, Pirates could ignite more interest in Visions of Atlantis as they stick to a great mix of symphonic and power metal elements that are engaging, expansive, and take the listener away from current world issues to enjoy themselves.