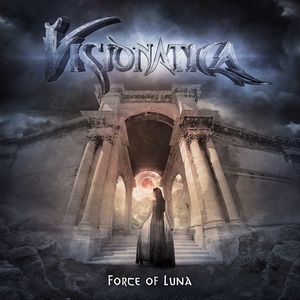 Have we reached a point where there’s just too much to consume? Access to music and new bands is stronger than it’s ever been, but that also makes it harder for a specific band to stand out among the crowd. If there’s an idea that’s been brewing, it’s equally likely that there are already plenty of bands trying to spread their version of it. Such is the case for symphonic metal and Germany’s Visionatica.

Visionatica’s first full-lenth, Force of Luna, is bound to find some favor with those who enjoy Nightwish, Within Temptation, and their ilk. Visionatica captures it all – big and sweeping synths, catchy riffs and melodies, and Amara Avodem has a suitable range and energy to front a band such as this. Some of the choruses are strongly memorable, with “She Wolf” and “Never Will Die” claiming some of the best uses here. Of course, there’s a softer one amid the others, and “The Thorns” is executed with just the right amount of feeling. So what’s the problem then? From a musical perspective, Force of Luna is solid, as noted above, but it just doesn’t have much of its own identity. Despite the catchy nature of the material and its flow, nothing compels to the point where you are going to find Force of Luna beating out some of the more established names of the genre.

If one is a die-hard follower of female-fronted symphonic metal, there’s much to like about Visionatica. But ultimately, their future offerings need to find a niche to settle upon that is more their own or they risk just being a face in the crowd.