The development of Olaf Thorsen in the power/progressive metal world is quite intriguing, leaving one successful band Labyrinth in 2002 to avoid confusion between the dreaded “project versus real band” debate for Vision Divine. While Vision Divine’s stock rose between Fabio Lione singing on the first two albums and his replacement Michele Luppi handling the melodies for albums three to five, Lione returned to Vision Divine in 2009 with 9 Degrees West of the Moon while waiting out the Magic Circle/Rhapsody (of Fire) contract stalemate.

Their seventh album Destination Set to Nowhere comes on the heels of Thorsen’s successful return to Labyrinth and their 2010 Return to Heaven Denied Part II reunion album, but rest assured that Thorsen’s guitar playing and songwriting ability shines at universal highs to give enough room for both bands to coexist. The serene acoustics, layered symphonic keyboards and Italian spoken word intro “S’io fosse foco” give way to a shimmering “The Dream Maker,” where Lione’s vibrato tonality and flair for the dramatic melody come through loud and clear against the backdrop of virtuoso keyboards and heavier guitar play between Thorsen and Federico Puleri.

Certain songs do evoke familiar mid-tempo nuances with open spaces between the verses and choruses like Labyrinth such as “Beyond the Sun and Far Away” as well “Mermaids from Their Moons,” but Thorsen’s approach with the chord progressions and rhythm tempo maneuvers keeps Vision Divine more on the progressive path than pure symphonic power metal. Favorites include the double-bass pumping “The House

of the Angels” where Lione delivers killer harmonies and a touch of his savage side and the soloing is tastefully emotive and the concluding title track- with an opening acoustic sequence eerily reminiscent of Ozzy Osbourne’s “You Can’t Kill Rock & Roll.”

Lione’s road work with Rhapsody (of Fire) and Kamelot proves his voice is well-suited to a myriad of styles, and the futuristic sci-fi themed Destination Set to Nowhere should be another instant purchase for all in the ProgPower community, in addition to those who’ve followed Thorsen and Lione through the years. 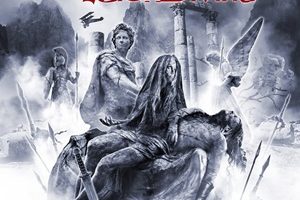