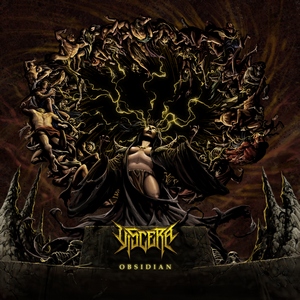 Given the Unique Leader pedigree for extreme music and the usual deathcore or tech/brutal death offerings, without checking out the album beforehand, one may have a bit of a misconception concerning Viscera. This scribe was quite pleasantly surprised as Obsidian continued to roll along, offering up a very different blend of extremity from what the usual UL label flag seems to bear, and one that’s ripe with some real potential to it.

It’s actually a bit tough to really nail down Viscera in it’s more base form, and as a debut it’s very notable in that regard. Sure, there’s easily identifiable elements from deathcore, metalcore, tech death, and even modern metal – but the end result doesn’t feel more strongly attached to any of them in particular. It doesn’t hurt that the band is full of established players, including Jamie Graham (ex-Sylosis) and members of Abhorrent Decimation and Martyr Defiled making up the instrumentation. Due to all of this, Obsidian rages with energy and aggression – but there’s also a melodic aspect to it as well. “Delilah” opens with some more modern trimmings (such as the keys) and catchy guitarwork but it doesn’t take long before it flexes some death metal muscle and drum battery. Then quickly turning on its head, it dives into more melodic territory again, with some clean vocals and playful riffing. These jumps from streamrolling death metal (see the tech-y opening to “Immersed in Ire”) into more metalcore-ish choruses could get potentially stale, and the band is quite aware of it – often opting for something more akin to the usage on Fit for an Autopsy’s last release than a clichéd harsh verse/clean chorus pattern. Graham’s vocal range shines in this regard, offering a variety of textures to suit the ‘switch on the fly’ mentality of the music. Of course, you are going to find some breakdowns here too, given the ‘core influences, but rest assured, they are done with a bit of grace – tracks like “Silentium” offer build-up and atmosphere to give them some added emotional bite.

Viscera is a refreshing piece of modern extremity that has all the makings of an act that is ready to rip into the scene. Obsidian is a potent debut release that successfully blends more technical riffs and flashy solos into a modern package that can simultaneously appeal to both young and older death metal fans without anyone feeling cheated. Brutal, but with an emotional weight to it as well.