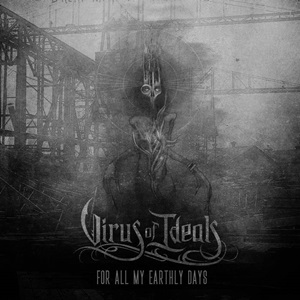 Considering the headline status of symphonic and melodic death metal acts across mainland Europe infiltrating all corners of the globe (including North America), it’s natural that younger musicians want to put their own creative hat into the game. Connecticut’s Virus of Ideals assemble both aspects to their style through this debut EP, For All My Earthly Days. Already establishing an overseas-oriented veneer from band moniker and title, the four songs contain varied moods, shimmering in proper understanding of heavy riffing, growled vocals, and shifting tempos while keeping an overall melodic/hook-oriented template that makes the material immediate and addictive.

Keyboardist Sean ‘Orc’ Adams plays an important role in establishing many of the musical hooks through his ivory flourishes and refrains – be it early on through the Epica meets Scar Symmetry-like title cut or the closing, shape-shifting “Bitter Parody” where contrasts move from Nightwish soundscapes to Lacuna Coil meets Dark Tranquillity heaviness. Also doubling up on the discernible yet spine-tingling growls give these songs an added dynamic twist that works brilliantly – “Save Your Tears” the most progressive song of the four benefits greatly from his bob and weave technique against Jess’ strident, angelic clean melodies (think Anneke Van Giersbergen meets Tarja Turunen) where things shift from a quieter, introspective mid-section to blasting death all within its almost six-minute timeframe. Guitarist Dylan Helm excels at clean to heavy transitions during the propulsive “Into the Flames”, probably my favorite of the four because of its musical aggression and power crunch during the verses plus storytelling lyrics that provide theater for the mind.

It’s one thing to study the genre and quite another to execute promising material that is on par with your influences. Looking at “Bitter Parody”, the main riff certain takes a piece of In Flames greatness during Colony but again pushes parameters because of Jess’ upper emotional register delivery, the layers of guitars, and drummer Francisco Alarcon’s mid-tempo fills and contrasts while maintaining a solid groove throughout. An impressive start for certain, Virus of Ideals has established a great cross-section style to build upon – a journey that could pay large dividends in attaining long-term followers.

Melodic death and symphonic metal fans in need of new talent, Virus of Ideals more than fits the bill.