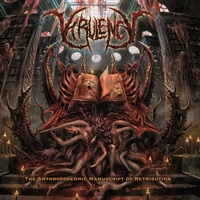 Bound to be the new gold standard in just how inhuman you can get vocals in death metal, Virulency will test your tolerance for low gurgles as you move through their debut, The Anthropodermic Manuscript of Retribution. Outside of that, you know the drill when it comes to this type of material (as if you didn’t have a clue based upon the artwork that adorns this one).

The Anthropodermic Manuscript of Retribution is intense. Brutal, slamming death metal that does its job well. Super heavy riffs with plenty of mid-tempo chugging to get your head moving (as well as the rest of you). It’s nothing outside of the norm, but it’s solid in the sense that they don’t focus on ‘slamming’ the entire time, and have the good sense to keep things musically intact. The main attraction here is going to be the vocals. There’s plenty of vocal diversity here, with the usual genre staples of shrieks, growls, and gurgles on hand and at the ready. But the first thing that’s really going to stand out as you begin your trek on this album, are the super-low noises that kick in not long after the opening track, “Myriapod Constructology Part I: The Inception” begins. It sounds more like The Predator clicking more than anything remotely human and may take you out of the moment (as it did this scribe). One does grow accustomed to them as the album plays on, but it must be stated how downright otherworldly they sound.

Outside of the somewhat eerie vocals, there’s not much that separate’s Virulency from the rest of the slamming death metal fanatics elsewhere. It’s a strong debut, and well-played, but the band would benefit from taking their vocal approach and applying the same level of oddity to their music. That would make for some truly inhuman material!