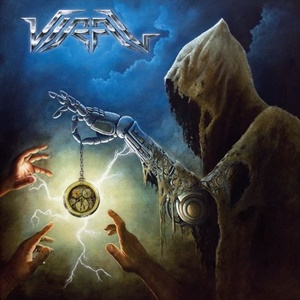 Brought to this scribe’s attention through Thomas Clifford (Profaned, Throne of Heresy, Abscession), Swedish act Viral have been together since 2012 and only released a self-titled demo in 2016 prior to this full-length. Content to work at their craft and perform live, the pandemic provided the best excuse to finally settle into the studio and record more material. These nine songs drive home a sound that has classic heavy metal and old school hard rock in its sights – filled with stirring twin guitar harmonies, pumping rhythm section support, soaring screams and melodies, and the feeling of triumphant steel hammering at the hearts and minds of all who love the genre.

The guitar tandem of Larri Malinen and Marcus Borggren rip and tear through these tracks, knowing when to push the simultaneous twin runs while setting up certain songs with a careful, playful bluesy veneer. The instantaneous spider web runs for “Going Down” have Iron Maiden meets Thin Lizzy at the heart of the attack, while more commercial textures come up for “Gallows” that fans of UFO to early 80’s Lizzy Borden may dig. The drum/bass weaving gives ample room for massive melodic hooks and musical interplay part to part – almost commanding fist waving/ headbanging antics right away on first exposure to “Scarred” as well as the title track. Then you have the razor sharp, multi-octave voice of Albin Forsell – possessing an interesting whiskey-laced roar beyond his helium-high notes that can shatter the sky, many will hear parts of Rob Halford and Bruce Dickinson taken on Albin’s own accord for “Machine” and the shapeshifting, double kick monster “Mephorius”. Impressive production from Niels Nielsen (Ghost, In Flames, Witchery) allows the listener to feel the energy and flow from Viral as if they transported themselves back to that 1980-1984 period when British metal reigned supreme. At 40 minutes these lads waste no time getting to the ideas, executing them quickly, and then moving forward to ensure little ear fatigue.

2021 is starting off strong for those that want to discover newer bands who still hold NWOBHM and traditional/true metal heroes in high regard as Viral have here. Curious to watch the development of this act – as this self-titled effort could be the start of a strong career, a la fellow Swedes Wolf from the early 2000’s.