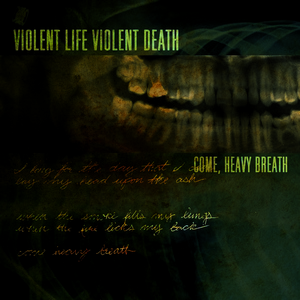 When dealing with a hardcore-based act, often the best descriptor that can be used is that the material is simply caustic. There’s no compromise, no poppy clean vocals (a la metalcore), and the material is simply a riff factory. All of these things can be said of Violent Life Violent Death’s second EP, Come, Heavy Breath. It’s angry, it’s pissed, and it never abandons that notion – coming at you with a vengeance instead.

With a title that implies gasping for air, Violent Life Violent Death make it their mission to oppress the listener with snarling aggression. Their particular combination of hardcore, metal, and punk attitude is the type that is meant to knock you backwards when you hear it. Lumbering riffs that open up the title track escalate into darker waters as the song continues to move ahead, culminating in a rather explosive and metallic crunch. Building up the momentum properly before diving headfirst into a primal breakdown to close things out is testament to the power of such moments when utilized properly. This level of abrasion is maintained through the disc, which sometimes ramps things up into burly, metallic riff-runs or hits the brakes into a hardcore breakdown that never fails to disappoint. The album’s last track, “Narcissist,” is the only one with some prominent vocals that aren’t being screamed at the listener, and even then, they aid in keeping the music heavy while still introducing some more melodic aspects to it (with no watering down of the formula, instead adding atmosphere).

With only 23-minutes in the bag, Come, Heavy Breath can focus on keeping things entirely visceral without having to worry about listener fatigue. As such, it’s go for the throat mentality works wonders. While it may be a bit one-dimensional in that sense, the riffs that accompany it will keep you interested in each track for multiple listens. A flat-out pummeling listen with none of the tedium that usually comes with it.