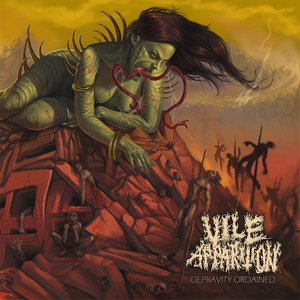 An Australian death metal band just birthed in 2017, Depravity Ordained marks the first full-length for the fledgling act. Though the members are experienced, and the band was partly formed from the ashes of Sewercide, so don’t expect a half-baked product in that regard. However, the band’s need to sound in all forms and functions as an early-to-mid ‘90s death metal entity does hold them back a bit.

To get it out of the way, Vile Apparition sound a lot like the bastard child of Suffocation and Deeds of Flesh. Not that there’s anything wrong with that, and emulating the particular masters of this style isn’t going to ding them in any way. But in doing so, they join a large crop of bands vying for the same territory. Opening cut “Mauled and Nameless” sounds so dead-on with its Effigy of the Forgotten tone that you’d swear you had been transported back to the early ‘90s, in both it’s slightly technical and abrasive approach, as well as the sound production itself – all the way to the tin can-sounding snare drum. It’s all well-done though, with heaving riffs that are bound to get many a body in motion and the technical aspects are enjoyable as well. Just don’t expect to hear anything you haven’t already been subjected to, and more than a passing vibe of familiarity.

If there’s one thing that does impact the album, it’s the overly long interlude “The Cursed Path.” Its placement is acknowledged, but with music like this, a moody instrumental (with no instruments mind you) that lasts 3-minutes and goes nowhere is simply too much. The same effect could have been received from 45-seconds of this. One other slightly questionable piece is tacking on the 2017 demo. From a completionist perspective it’s understandable, but it is of even lower sound quality, and adds the runtime up to over 50-minutes. Way too much extreme death metal for one sitting.

Vile Apparition have some good things going for them in the emulation of the aforementioned bands, but to really stand out, they need to take things a step further. For a dose of extremity, it checks off all of the boxes, but to get people to come back to it repeatedly, there needs to be something more substantial offered.