Vidian – A Piece of the End EP (Arachnophobia Records) 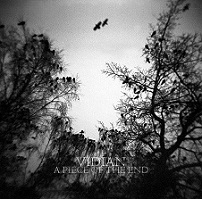 A Polish quintet who has been kicking around since 2009, Vidian plays a heartfelt, likeable brand of experimental metal, citing the (just-as-likeable) crew of Isis, Cult of Luna, Katatonia, and Gojira as influences. While it’s a reach to suggest the Poles are on the same sonic platform as the above-mentioned four bands, their A Piece of the End EP manages to traverse some dark, foreboding paths with nary a stumble.

Rather prone to dissonant guitar runs and those eerie calm moments that are part-and-parcel with post-metal, Vidian don’t manage to get going until the EP’s third proper jam, “Pole Shift,” where their melodic sprawl and the sing/growled vocals of Szymon Brążkiewicz come into focus. The track itself is wide open, rounded off with pulsating stop-starts, and a spate of chugging guitars. The EP’s title track veers somewhat in a different direction, finding Vidian going to work in the narrow confines of hard and inflexible post-metal.

Apparently, the band has two full-lengths prior to A Piece of the End, which would be worth a spin given the strength this particular EP. But as we all know, anything hovering around the post-metal spectrum often gets a little bit of a harder time and less of a fair shake. Certainly not Vidian’s fault, who would be wise to make even better use of the bands they’re so influenced by.