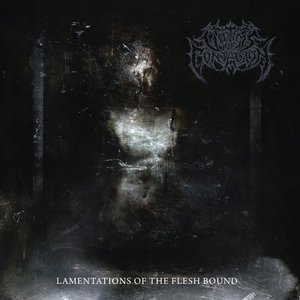 Step back in time about 4 years ago and we had checked out Victims of Contagion’s first EP, Parasitic Unborn. It was a solid piece of tech-death that didn’t steer away from some lengthier songs, but there was a long period of radio silence. Thankfully, the band is back and just as brutal with their full-length debut in the form of Lamentations of the Flesh Bound.

Everything that Victims of Contagion were able to do successfully from the beginnings are still present with the band and improved upon. While they have an element of tech death to them, it’s not a straight, by the numbers affair. It’s rooted in an older death metal vibe and there’s a nice blend of the two styles (newer being more of the tech-y variety) in the music that keeps them from sounding dated with their approach. There’s more emphasis on the mood and atmosphere of each track, with the incorporation of some light blackened elements and melodies (and a tiny dose of synth) too. Something that benefits the band greatly as they don’t always just go in with a jackhammer and demolish everything in sight. The closing track, “Autophagous Horizons,” settles in at over 12 minutes – moving seamlessly from heavy grooves to scorching speeds to dark/macabre atmosphere to a ripping solo without a dull moment in view. Likewise, the vocal attack routinely switches things up across the extreme metal board and occasional melodic solos and leadwork will frequently catch your ear.

Consistently engaging, Lamentations of the Flesh Bound is an extreme metal release that deserves a larger audience. The combination of technical skill, mood-building, and overall songwriting is one that rivals some of the stronger bands in the scene. Victims of Contagion have a strong sense of what works in death metal and uses it to their full advantage.