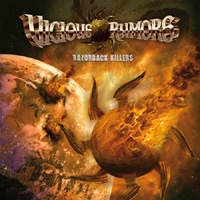 Another one of those fabled “heritage” bands that have been able to stick around, Vicious Rumors have long been beset with lineup alterations and label squabbles. Main dude Geoff Thorpe has managed to keep this ship afloat, and he may finally get his just due – Razorback Killers is easily the best thing the band has done since their seminal Welcome to the Ball album nearly 20 years ago.

Sliding right into the reclusive sphere of thrash and traditional metal (think of a less spunky-sounding Death Angel, for point of reference), the addition of new singer Brian Allen gives the band some pop and cackle. Allen has some Ripper Owens in him, but also the tonality and soul to convey slower, more concerted numbers like “Pearl of Wisdom.” The man does shoot for the sky with some hair-raising falsettos on “Blood Stained Sunday” too, and it’s not a stretch to hope the band’s often tenuous vocal position has been settled.

Lots of gems on here, most notably album opener “Murderball” which is far and away one of the better “single”-oriented songs we’re going to hear all year. Allen shines on the chorus, while Thorpe’s penchant for subtle melody (check out the twin-guitar break) puts it over the top. “Razorback Blade” and “Axe to Grind” own the thrash-end of the band’s sound, while mid-tempo romps like “All I Want Is You,” “Let the Garden Burn” and “Rite of Devastation” are accessible, and dare we say, “tasteful” constructs that are indicative of the veteran songwriting sheen of Thorpe.

Hats off to Thorpe for moving forward when so many would pack it in.Razorback Killers isn’t as much of a surprise as it is the acknowledgement that in order to run with the thrash pack, the goods have to be delivered. For a band that has been around since 1979 (!), this is a mighty strong album, one that should give Vicious Rumors some much-needed street cred, something that has long-eluded the band.