What kind of sonic trickery could come from a band featuring members of Agalloch, Hammers of Misfortune, Worm Ouroboros, and Yob? The possibilities…sheesh; where to begin? The obvious differences between each band are enough to generate a multitude of avenues for approach, but in the very early moments of Deeper Than the Sky, VHÖL douses such ideas rather quickly. Rather than going haywire in experimental-ville, the four-piece brandishes a super-sharp thrash stick. But it’s a differentiated kind of stick, not without its well-timed quirks and cache.

Vocals are supplied by head Yob dude Mike Scheidt, who at first blush, sounds like a fish out of water without his trademark wall ‘o sound to work with. Yet in the context of fast-paced songs (drummer Aesop Dekker might be the real star here, actually), he’s more gritty than one would think. His biting tone on “The Desolate Damned” and the album’s title track are the product of searing, hearty aggression. Lest we forget bassist Sigrid Sheie, who chips in with shadowy female vocals, to which take the cake on the album’s finest moment, “Lightless Sun,” and eight-minute rambler full of adventurous riff tumbles, reckless Dekker blasting, and multi-faceted guitar work, some of which even heads into USBM territory.

Deeper Than the Sky gains traction as it gets deeper into its running order, with the aforementioned “Lightless Sun” and closing jaunt “The Sun” (quite the frenzy on this one, too) getting the nod as the cuts to really be on the lookout for. But the pace-pushing, razor-sharp riffs, not to mention’s Scheidt’s pretty darn convincing vocals give VHÖL’s second full-length platter a shot in the arm, thus making it more than just some off-time side-project. This is A-level aggressive metal, in whatever form you want to tag it. 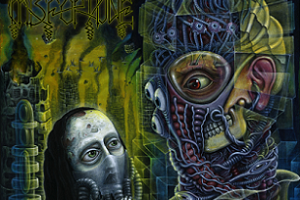