Vhäldemar – Against All Kings (Fighter Music) 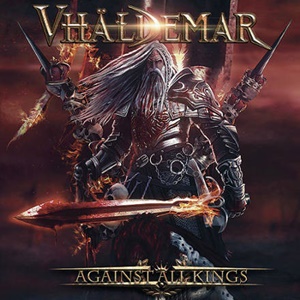 A Spanish heavy metal band, Vhäldemar are veterans at this point- together since 1999 and on their fifth studio full-length, Against All Kings. Previously signed to Arise Records early in their career, they went the independent, self-finance route for the last two records before Fighter Records gave them another shot at label recognition. After a few whirls it’s easy to hear the band gravitate towards a Teutonic-oriented power/heavy metal template through these eleven tracks – taking in numerous 80’s/90’s influences to create very catchy, anthem-like material.

The crux of Vhäldemar’s sound rallies around sharp power riffing and steady rhythm section output – although it can shift from a mid-tempo Accept/Grave Digger-like feel to something more in the up-tempo Primal Fear meets Helloween arena. Both aspects happen in the out of the gate one-two punch of “Metalizer” and “Old King’s Visions (Part V)” – sure to get that audience engaged with an addictive main riff/chorus combination for the former, while the latter has that thunderous double bass and dueling guitar/keyboard arpeggio solo action to energize. Two interludes “Vulcano” and “Titans in D Minor” give the listener brief reprieves, although in more of a piano or shred/neoclassical context. These musicians know how to grab attention right away, perfecting the uplifting harmony or cultural aspect to galvanize the troops – it’s hard to not be shouting in unison to “Howling at the Moon” or humming those guitar parts from Pedro J. Monge.

Where Vhäldemar could lose ultimate appeal is in the gravelly, semi-strained range for singer Carlos Escudero. When he chooses to be more vicious during the verses of “The Last to Die”, it works as a buffer to the sustained upper notes that he tries to hit convincingly but lose impact due to that lack of Halford/Dio/Dickinson professionalism. Carlos needs to stick to more of that Mark Tornillo/Chris Boltendahl sneer and let the lower/mid-range rasp shine, as the musical gallops, guitar/keyboard hero lead breaks and heavy hitting power action more than makes up for those limitations.

Kudos to sticking their guns for over 18 years – Against All Kings will have its pocket of appreciation, it’s just slightly behind what the quality of what bands such as Hammerfall or Grave Digger deliver these days. 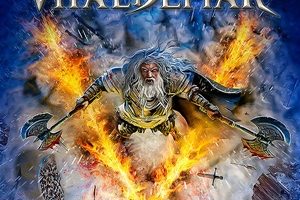