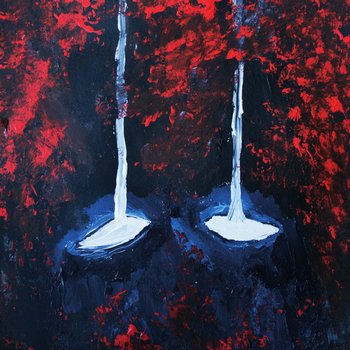 The biggest knock against De Val unfortunately has nothing to do with the music it contains and everything to do with the timing of its release, rolling out alongside two of the brightest burning stars in the black metal universe (covered elsewhere). This Dutch work valiantly journeys across many a dark territory on its own terms and dresses it in a haunting, gorgeous piece of cover art. So what does De Val actually entail?

That’s a curious thing as it is an effective application of the cavernous school of death metal to the black metal form: the sound is enormous and the songs sure and pulse with aplomb. A deathened black metal, even though that seems wholly redundant as a concept. Eponymous opener “De Val” illustrates both sides and blankets it all with a thick, suffocating atmosphere and melodic bent as it vaunts from pint to point, always beholden to a palpable anchor of dread. Dread of all things aphotic is the essence of “Vergif”, a dread tempered by groove, a tangible dread made sweeter by the melody that seeps in to avoid complete collapse. Oddity/Standout is closer “Verder Van Het Licht”, a marriage of a gradual, quiet build that bursts into a female vocal-draped final march, a march that comes to an abrupt end with no tangible sense of closure.

Indeed, at just over 32 to minutes it’s easy to feel as though the abrupt ending should have been followed by a ‘To be continued…’ placard. An enviable problem to have of course, as it’s better to offer up just enough that a listener is left wanting more rather than suffering a 35 minute album across 68. De Val is a place of bleakness and its lean, non-indulgent take is appreciated. All in all it’s a solid experience, similar enough in the genre tropes it does apply as it is different in the nuances it brings to the table. Take a long look into the pooling eyes upon De Val’s cover but do not despair, it will accompany your fall.