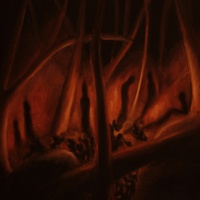 If there is one label that seems to be able to sift through the underground to find metal bands doing off the beaten path stuff, it’s Hypnotic Dirge. French avant-garde Verlies is their latest acquisition, in collaboration with Throats Productions. Le Domaine des Hommes was originally released independently through Bandcamp, but is now getting a proper, label-backed release.

Le Domaine des Hommes has an eclectic mix of genres within its black metal foundation. There are moments of unbridled black metal for sure (complete with furious blasts and shrieks) but the band often forays into less caustic territories. There are moments of jazz, post-rock, gothic, and even some traditional metal influences to be found within the seven songs presented here. “L’Absolution” has it’s fill of acoustic moments that move between more traditional black metal and spoken word, near-gothic metal moments. “Maladie” is full of twists and turns, going from post-rock to heavy death metal riffing towards the end of the track that leads into a tremolo picking assault with clean vocals. “Marcher Sur La Vide” has a more traditional metal feel to it, with catchy melodies within the guitarwork and the overall decrease in abrasion with this track.

The atmosphere switches between menacing and melancholy, and never does anything feel forced or contrived. Verlies moves between a number of strange bedfellows, but everything clicks. There’s a rawness and emotive quality to the album, where you aren’t sure where it’s going to take you next but you want to be along for the ride. This is an album that is more than the sum of its influences and parts.