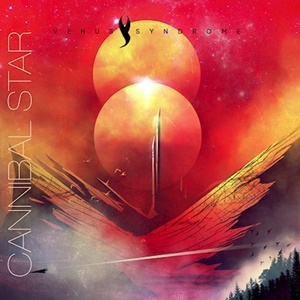 Consisting of French and Brazilian musicians with ties to solid power/heavy metal and progressive rock acts over the years, Venus Syndrome started under the auspices of guitarist Ayman Mokdad as an environmental progressive rock/metal group. For those not in the know, the Venus Syndrome is a concept where Earth undergoes runaway warming, causing the oceans to boil off and viewed as humanity’s greatest threat to existence. Cannibal Star is the second album from the five-piece, following up last year’s self-titled debut – showcasing eleven tracks of tightly woven/executed material that fuses decades of influences to create an array of dynamic songs carrying plenty of earworms and interplay moments throughout.

Compact arrangements power-packed with bristling main musical components that branch out to layers of tiny intricacies for deeper processing are key to the Venus Syndrome style. Instrumental opener “Ouverture 2040” contains a Dream Theater meets King’s X feel for stunted guitars, a reverberating keyboard underpinning, and driving rhythm section work over it’s 2:41 framework. Upon the first notes pouring out of singer Emmanuelson almost a minute into “Dark Side of the Sun”, many will be mesmerized by his conviction, versatility, and note holding abilities – the man has a great command of his voice, much like Russell Allen and Ray Alder in their prime. The interplay between Ayman and keyboardist Rodolfo Lima Sproesser gives Venus Syndrome an edge and cool factor that isn’t the norm for progressive rock/metal bands – the organ splashes during the mystical heavier “Golden Mind” plus jazzy spots for “Breaking the Black Stars” dynamic shifts that stand out while the choruses glisten. The subtleties between special bass lines, crunchy, lower tuned guitars, and switch-ups between solid groove mechanics and adventurous fills in certain instrumental segments keep the band in that progressive prism, while serving the needs of the song at hand first. Favorites change daily – but it’s hard to not sway to the hypnotic prowess of the Haken-esque “Like a Monster” or progressively propulsive “Sideral Groove”.

Progressive music doesn’t always have to be abstract, obtuse, or protracted – there are musicians who can take the dimensions and freedom into tighter windows and still amaze and astound. Evolving from a Dream Theater cover band to their own original act, Venus Syndrome possess plenty of potential as they keep a melodic, modern progressive rock/metal sheen to their compositions and performance for Cannibal Star.