Venomous Concept – Politics Versus the Erection (Season of Mist) 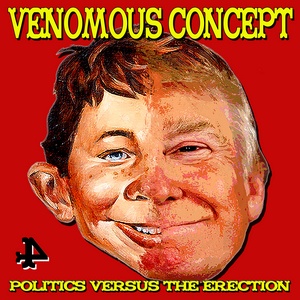 One might say that Venomous Concept is a supergroup by any standards, given vocalist Kevin Sharp (ex-Brutal Truth/Lock Up), Napalm Death’s Shane Embury and Danny Herrera, and John Cooke (Corrupt Moral Altar) make up the act. But that’s not to take away from their absolutely scathing rendition of hardcore punk. The band’s fourth album, Politics Versus the Erection, is one of those bulldozing efforts that feeds off of visceral energy and filthy riffing.

A fusion of grind, punk, crust, and d-beat, Venomous Concept sound righteously ugly. There’s a primal feeling to the band’s sound, and it’s one of those ‘fuck it and go for broke’ type of albums that is meant to unleash some rage. So to that end, it’s a great time to release this, given the state of the world this year in 2020. Lots of anger and frustration easily bubbles to the surface when cranking a song like “Dementia Degeneration,” with it’s crusty and punk (with even a bit of crossover thrash) riffing taking the centerstage while Kevin Sharp screams chaotically in his best possible voice. It’s an unrelenting beast once the engine gets quickly started with “Simian Flu” and it’s urgent, blitzkrieg follow up in “Hole in the Ground.” But it’s impressive that they can carry that same urgency at the end of the album, with the combo of “Broken Teeth” and its explosive grind-y riffs and battering drums coupled with “Shadows” galloping punk energy being a considerable high note, with no loss of efficiency. The only chance for breath comes at the closing title track, which works to get you ready for another round of listening.

Politics Versus the Erection is a pissed-off effort that is meant to stoke the flames of anyone listening to it. It may have only that intention in its repertoire, but it knows exactly what buttons to push without things becoming tedious or one-note. Crank it loud and watch the destruction unfold.