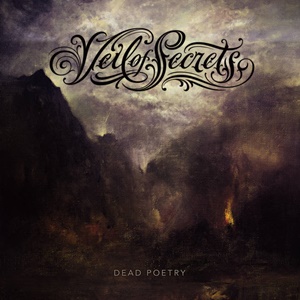 It’s always exciting to hear musicians with well-established metal credentials unite in a new band. Such is the case for Veil of Secrets – Asgeir Mickelson best known for his work in Borknagar, Ihsahn, and Spiral Architect, while vocalist Vibeke Stene spent ten years in Tristania. Coming together in 2012 for another project God of Atheists, those planted creative seeds soon blossomed into the ideas that take shape for Dead Poetry. Asgeir took on guitar, bass, and drum duties, adding support from violinist Sareeta and harsh male vocal accents courtesy of Erling Malm – the result being a very primitive, pure doom metal outing reminiscent of classic late 80’s/early 90’s influences, especially within the Candlemass platform.

The blending of Vibeke’s vibrant and soothing operatic melodies against the pronounced growls of Erling makes for wonderful beauty and the beast contrasts during “Remorseful Heart” – Asgeir locking into a steady mid-tempo riff hook that wouldn’t be that distant to the peak work on Ancient Dreams-era Candlemass. His measured acoustic guitar intro that gives chase to twin guitar harmonies and Sareeta’s thoughtful violin passages for the follow-up “The Lie of Her Prosperity” makes for another highlight, Vibeke rising and falling during many of the verses to match the magnificent, morose and semi-classical atmosphere. Choosing to keep the production values aligned to the older doom feel also is refreshing – Asgeir’s drumming specifically a beneficiary from a less synthetic and much more in your face aspect. The duo creates indelible magic on building out the material – starting from an effective set of musical and vocal hooks to keep listener engagement on high to hear the nooks and crevices of embellishment or dynamic contrasts. Be it the multi-part harmonization from Vibeke in spots for “Fey”, the stunted rhythms and epic dual electric guitar weeping moments for closer “Entirety”, or the forceful bass and sparse instrumental mid-section movements for “The Last Attempt”, Veil of Secrets understand and execute within the doom metal platform early on as seasoned veterans – a good sign for the future.

Doom metal itself has been very fruitful as a genre as of late. Add Veil of Secrets to that collection, transporting the listener back to 1986-1990 with a bit of that extreme/folk touch that more current underground followers treasure.