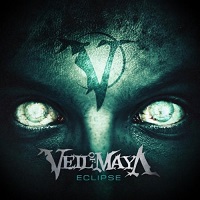 Probably realizing its core audience has busy lives (i.e. texting, tweeting, web-chatting…basically anything that doesn’t involve in-person interaction), Veil of Maya limited the running time of their new effort Eclipse to a poultry 28 minutes. This was an old trick used by Slayer on Reign In Blood as means to prove they could annihilate their audience in a short time-span, AND the entire album was able to fit onto both sides of a cassette tape. Methinks VOM’s fanbase has zero idea what a cassette tape is, but Blistering could be showing our age here…

As the most digestible of the Sumerian bands, Veil of Maya combine the crushing staccato lurch of Messhugah and play it a warp speed, all within the confines of glossy and well-produced death metal on Eclipse. The band doesn’t forsake groove in all of this, though, as “Punisher” bobs and weaves with fluent precision. Even some melody decides to make an appearance on “Winter Is Coming Soon,” a song that begs for whiney clean vocals but never goes that route. Smart move, gentlemen.

The album doesn’t take full flight until the domineering “Numerical Scheme” takes form. Led by a futuristic, utterly memorable opening riff from guitarist/main songwriter Marc Okubo, “Numerical Scheme” paints the picture of a death metal landscape that can exist beyond its core, pre-90’s elements. “Vicious Circles” is the counterpart to “Numerical Scheme,” surging forth with a barrage of frenetic riffs and blast-beats, hitting its peak with a gorgeous atmospheric keyboard interlude. Your uncle’s death metal this is not, that’s a given.

As we’ve come to learn the last 12 months, death metal is trying its hardest to fight the evolutionary process. The onslaught of retro death metal bands is essentially trying to curtail the progress made by bands like Veil of Maya and labelmates of Born of Osiris, and one can understand why – it has to be unnerving for the old ‘heads to see dudes wearing polo shirts shred circles their gauntlets and buzzsaw guitars. Rest assured, Eclipse isn’t the album to take death metal into the future, but man, what an enticing glimpse it provides…