Various Artists – Ronnie James Dio: This Is Your Life (Rhino) 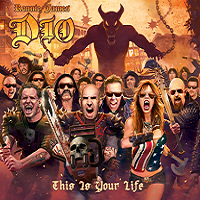 Not much of a surprise that all sorts of all-stars were assembled for This is Your Life, the first post-death official tribute to Ronnie James Dio. (Sorry, Jorn Lande – your Dio tribute from a few years ago doesn’t count.) Heck, even Tenacious D lend a hand, which might provide some crossover effect…maybe not. But, the primary metal contingent here is pretty strong; Halford, Biff Byford, Anthrax, Lemmy, Metallica, and Killswitch Engage, each providing their take on various Rainbow, Black Sabbath, and Dio solo songs, proving that few singers have as much influence and staying power as ‘ole RJD.

A good portion of these tunes have appeared elsewhere, namely Anthrax’s “Neon Knghts,” Adrenaline Mob’s “Mob Rules,” and KSE’s “Holy Diver,” which became an unexpected hit for the Mass metalcore troupe and next to “Neon Knights,” is the most enjoyable tune in the lot. Some sub-metal entries by way of Corey Taylor’s passable “Rainbow in the Dark” and “Halestorm’s less-than-throttling “Straight through the Heart” get the nod, while German metal queen Doro provides her version of “Egypt (The Chains Are On)” from Holy Diver. (Note: Someone should have covered “Caught in the Middle,” the best song on Holy Diver, bar none.)

The Metallica “Rising Ronnie Medley” is of course, the song with the most interest, as the would-be rejuvenated thrashers blend Rainbow’s “A Light in the Dark,” “Tarot Woman,” “Stargazer,” and “Kill the King” into one jam, much like they did with their excellent Mercyful Fate medley 16 years ago. Fittingly, Dio has the last song on the album – the piano ballad “This is Your Life,” which originally appeared on 1996’s overlooked Strange Machines. So in finality, This is Your Life is a rather complete package, and with proceeds going to Dio’s Stand Up and Shout Cancer Fund, this is a tribute that for once, doesn’t stumble all over itself in a haze of pretension.