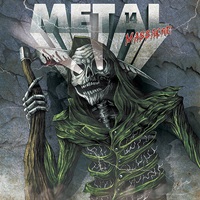 Hitting the motherload of metal compilations, the Metal Massacre series introduced the world to a treasure trove of future headway makers and headliners in the industry: names like Metallica, Lizzy Borden, Voivod, Trouble, Slayer, Possessed, and Overkill to name a few spread their sound to the growing underground masses who craved new bands in the 1980’s. Formerly a yearly tradition, the last two editions came out in 1995 and 2006 – probably due to consumers disinterest in the ‘compilation’ aspect when creating your own virtual playlist of new artists is within a few fingertips/ keystrokes. So it’s exciting to see where the 14th edition is going – especially considering Primordial’s Alan Averill overseeing the spirit of this particular set of bands, his tastes and outlook similar to the original ‘old school’ intent of the product.

It shouldn’t be that shocking that Montreal’s Metalian start things off for the true metal cause with “The Traveller” – their NWOBHM spirit and twin guitar harmonies sure to raise fists to the sky. Another highlight is the Swedish/Canadian power metal oriented Assassin’s Blade, as “The Demented Force” features ex-Exciter voice Jacques Bélanger and riffs that would make Mercyful Fate and Portrait followers perpetually happy. We get acts from Peru with the Night Demon meets Raven-esque Cobra, stoner/doom 70’s metal smoothness with Virginia’s Corsair, and the mighty Crypt Sermon who’ve been praised on this site before, as “Will of the Ancients” keeps classic doom on the landscape.

Know going in that the LP and CD/digital versions differ slightly in the sense that the latter gets three bonus cuts for Walpyrgus, already signed Visigoth, and Ravencult – each strong in their own right for traditional metal, epic metal, and faster blackened thrash output respectively. Proving that there is plenty of self-released bands fighting to work their way up the ranks, Metal Massacre XIV is probably Metal Blade’s best showcase in at least 25 years – do yourself a favor and get acquainted with this roster of groups, as there will be many that deliver killer albums for the foreseeable future. Let’s hope that it won’t take another decade for XV to hit the pavement.