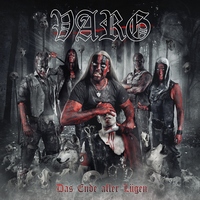 Of all of the subgenres heavy metal has come up with over the last decade or so, Varg’s “wolf metal” is one that seems to stand out. Not entirely sure what it means, other than the relation to the band’s name of course, but at least it’s better than ‘power progressive folk black death’ in terms of digestibility. The band released a German and English version of their fifth album, so we’re going to stick with the English one for this review.

The sheer diversity present on The End of All Lies shouldn’t work, but somehow it does. The title track fires off into Amon Amarth-territory, with uptempo and aggressive riffs and a gorgeous lead that surrounds the chorus only to burst into even faster and thrashy territory on “Revolution.” Said track also brings us further into the melodic side of the band, with an addictive chorus. Later on, you are hit with one of the most danceable riffs in metal since Amaranthe’s “Drop Dead Cynical” with “Achtung.” That song is sure to be a crowd-pleaser in the live arena with the “achtung” filled chorus shouts. Things get a bit darker once more for the appropriately-titled “Darkness,” which moves more toward symphonic black metal with a power metal twist. Anna Murphy of Eluveitie provides some vocals for “The Dance of Death,” which takes the tempo down a few notches and provides one of the highlights of the album. Yet again, brutality and speed take over with “Einherjer” and the absolutely pummeling “Winterstorm.” The contrast of speed on “Winterstorm” with a melodic chorus gives a real adrenaline rush towards the end of the disc.

With so many different approaches, you would think that one of them wouldn’t work and cause the album to falter. That doesn’t happen on The End of All Lies. The variety present gives the album added strength and depth, and is sure to give plenty of replay opportunities. Black metal, folk metal, power metal…you can’t go wrong with this one.