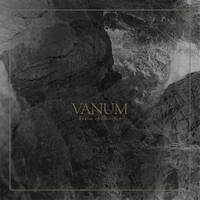 There’s been some buzz about Vanum, due to its union of members: K. Morgan of Ash Borer and M. Rekavics of Fell Voices. Despite some crossing of the paths between the two before, Vanum marks the first time that the two have sat down and written something for a completely new entity. Those thinking that they can sum up the band with a simple mathematic formula (Ash Borer + Fell Voices = Vanum) are thankfully out of luck.

While one can go through and find pieces of the two aforementioned bands, Realm of Sacrifice is more than the sum of its parts. This is melodic and atmospheric black metal that manages to evoke some feeling without resorting to any post-whatever tactics. The main weapon of Vanum is tremolo picking – expect to hear much of it as you immerse yourself in the album’s four tracks. But this isn’t a whirlwind of chaos either, as much of the picking occurs at mid-tempo speeds, giving it a more moody and sometimes eerie feeling. “In Immaterial Flame” escalates and de-escalates with equal dexterity, offering up moments of melodic clarity within a murky framework and violent bursts right after another. “Realm of Ascension” sneaks in some subtle melodies in about half way through the track, which prove to be some of the strongest on the album. But the clear forerunner for ‘best track’ (if that’s such a thing) is “Convergence.” Following an introspective opening, there is an eruption of fury, and the track’s mid-tempo tremolo picking melodies are captivating to say the least. For those moments that the track picks up speed, you are treated to some dizzying fireworks.

Realm of Sacrifice serves up a debut that should please fans of both members’ respective bands yet offer some new territory as well. This is some solid black metal that will serve well as the soundtrack for sitting outside and watching the horizon just before a thunderstorm hits.