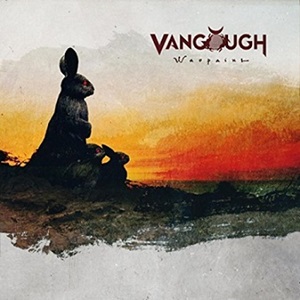 Three-piece progressive bands in the heavy realm rely on strong musicianship and intuitive sensibilities to fill the gaps where large groups can add that extra power player in the mix. From Rush to King’s X and even in more recent times Iris Divine, when pulled off the results can be breathtaking. Vangough are another trio that since 2007 have worked their sound up to an eclectic, exotic melodic cocktail that is rhythmically enticing and addictive as it is challenging – gaining favorable opportunities with ProgPower USA and touring opportunities with a major influence in Pain of Salvation across North America. Warpaint is the latest full-length, and moves between numerous alternative and progressive rock/ metal nuances that encapsulate decades of listening and playing experience, giving credence to a very diverse offering cut to cut.

As musicians, Vangough lay down subtle sequences of dazzling time signature manipulation or push/pull chord to clean mastery, always thinking forward to develop a semblance of proper construction and natural groove/hooks. For instance, the rhythm section of bassist Jeren Martin and drummer Kyle Haws gain ample spotlight for the alluring progressive instrumental sequence to “The Suffering”, which then becomes an epic eight-minute plus arrangement of jagged Tool meets Alice in Chains darkness against natural driving metal riffs. Outside of “Dust” (which contains an interesting drum similarity to “Would” from Alice in Chains) and “Knell” that appear early and late in the record, the other five tracks provide longer exploration of ideas and thoughts, especially important to get out some emotive lead work for guitarist Clay Withrow on the semi-ballad “Till Nothing’s Left”. Clay also does double duty as a vocalist, and his dramatic, chameleon-esque orientation draws comparisons from diverse sources – Russell Allen and Daniel Gildenlow two surefire peaks into his phrasing and calm control when you hear the shape shifting opener “Morphine” and wandering, otherworldly “Black Rabbit”.

For all the positives regarding Warpaint – the minor downfall lies in the band’s obvious love for Pain of Salvation. It’s acceptable to have a major influence as your calling card, but at this stage in one’s career, establishing your own take in a progressive rock/metal framework seems imperative if wanting to move up the ranks. Vangough need to decide whether they want to consistently live in the shadow of a major player, or develop into one of their own.