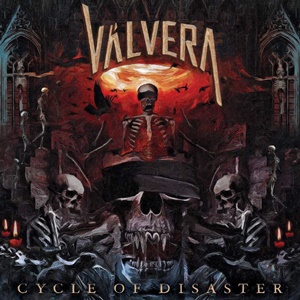 Arising in 2010 to release two albums (the latter of which Back in Hell their first English-only), Brazilian band Válvera deliver an intriguing mix of old school and new/modern aspects to their thrash template for the latest full-length Cycle of Disaster. Garnering half of their new lineup in between records, bassist Gabriel Prado and drummer Leandro Peixoto join founding vocalist/guitarist Glauber Barreto and guitarist Rodrigo Torres on this nine-song journey that possesses plenty of natural Sepultura-oriented angst and fury, while also taking in some European/American aspects to hopefully differentiate themselves a pinch from their South American contemporaries.

Lyrically addressing many of the historical catastrophes and horrors that have happened to the people of Brazil, everything from radiation contamination for “Glow of Death” to the end of time for “All Systems Fall” is fair game against the pounding riffs, militant tempos, and sheer force put forth from the musical side of things. Glauber as a singer has this desperate grit and commanding bark – elements of Robb Flynn, Max Cavalera on through to Phil Rind during some of the clean sections of highlights like “The Damn Colony” or the melodic-enhanced “Fight For Your Life” that features a couple of Iron Maiden-like twin guitar segments for additional earworm enhancing. Shifting gears aids the Válvera cause – stop/start mechanics support anticipation for the subsequent activities – be it faster, heads down and double kick driven on opener “Nothing Left to Burn” or the more Metallica-ish stomp throughout “O.S. 1977”, the dynamic nature track to track eliminates any possible ear fatigue. The galloping nature to the many low-tuned guitar passages gives the material that traditional aspect that differs from most aggressive thrash bands – and hopefully will be a staple of future Válvera records from this point forward.

If there is one hint of disappointment, it would be in the prototypical skull/skeleton dominated cover art for Cycle of Disaster – let’s hope that the clichés don’t abound the next go around. Most when pressing play will be impressed with this effort – it’s slightly melodic thrash with plenty of crunch, bite, and passion, which most ardent followers crave.