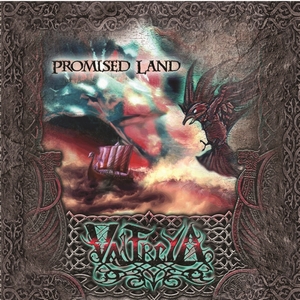 It could be said that Valfreya’s second full-length, Promised Land, was a long time coming. Their previous album, Path to Eternity, was released back in 2012 after all. But thankfully, Promised Land is a case of an album being worth the wait, as the Canadian symphonic melodic death/folk act spread their wings on this one, taking a concept of Eric the Red discovering America and giving it a suitably metallic and epic tone.

A key feature of Promised Land is that of variation. Valfreya may be able to lump themselves in with more upbeat acts such as Ensiferum, Wintersun, or Equilibrium, but their approach stays diverse and never leans into the more “goofy” side of folk. On the heavier side of things, there’s the blast-ridden attack of “Pandemonium” and driving riffage of “Evolution.” These contrast nicely against more melodic cuts like the folky build-up behind “Peuple du Nord” and epic chorus of “Warlords.” The majority of tracks tend to go for the speedy approach at some point in their runtime, offering the band a darker approach than some of their peers. The switch-up, even visible in the individual tracks, is benefitted by Crook’s vocals, which mutate from soaring clean vocals to potent rasps as required. Add in the symphonic elements and folk instruments and you have a combination that can pull off being both upbeat and aggressive, and appeal to a broad spectrum of listeners.

Some tend to doubt more folky albums because of the more jolly nature behind it. But rest assured, Valfreya is the real deal, in both the catchy components they provide as well as the ability to crank up the adrenaline and maintain an authentic metallic edge. If you are looking for some folk-infused material with some bite still behind it, Promised Land should suit your needs amicably.