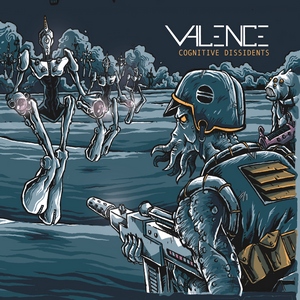 Jumping into the instrumental prog category is a challenging thing. For many bands, there’s a feeling of technicality over songwriting, which makes it appeal only to their fellow peers. While there’s nothing wrong with that particular approach, it does make for a somewhat limited audience. Thankfully, there have been an increasing number of bands that are able to deliver a technically-proficient experience but still allow for some appeal to those outside the usual circles. Valence can be safely added to this list with Cognitive Dissidents.

Make no mistake, these are long and progressive tracks as a whole. A four-part song, as well as a few 7-15 minute songs can appear to be daunting to the untrained ear. But when you first dig into the opening song, “Dammit, Lana!” you will be surprised to see what the band is capable of doing with this format. The intricate guitar lines are frequently as dazzling as they are incredibly catchy, and the band isn’t afraid to shake things up with some groove either. Sprawling riffs and a genuine sense of atmosphere and timing keep the track moving, and some of the bass and drum work beneath is such that it’s fun to go back and play attention to the different instruments do their thing within the mix. With some tracks, things get more melodic and it keeps things from feeling too overwhelming as other tracks turn up the progressive heat (such as the playful “Walrus”). Regardless of track, the bouncy/jazzy feel also tends to spice things up, and it’s an added contrast to the more melodic/atmospheric and more furious moments. Lastly, the use of organic elements instead of pure synth is a welcome one, which gives the music a bit more personality of its own.

There’s much to enjoy with Cognitive Dissidents for the progressive metal fan. But even if you aren’t, the way that they blend together a concoction of different elements makes them worth a shot if you are looking for some instrumental metal that isn’t daunting or completely driven by technicality.