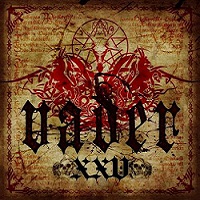 Old Vader albums have become scarce, the product of their ill-timed deals with Earache (why the label ever dropped these guys is one of the biggest mysteries of the 20th century) and Pavement Records. Following in the tradition of Testament and Destruction, Vader has opted to re-record their classic tracks, for what amounts to a virtual “Best-of” from an absolute death metal institution.

Culling from material going all the way back to the band’s Third Reich demo (which reportedly is either the most traded or sold demo in death metal history), XXV demonstrates Vader’s versatility and ability to keep death metal fresh and moving. Neck-twirlers like “Crucified One” and “Dark Age” (the band’s arguable ‘hit’) are testaments to how catchy and ingrained Vader’s style is.

With singer/mainman Piotr Wiwczarek leading the charge, more recent and unheralded material like “Wings” (off the very underrated Litany), “Epitaph” (Revelations) and “Dark Transmission” (The Beast) hold up quite well against the band’s classic mid-90’s period.

A novel concept all-around, XXV is the type of album more death metal bands should take cues from. Vader recognizes the depth of their catalog and giving it beefed-up and modern production job on two discs was a stroke of genius. Hard to believe Piotr and the gang have been at it for over two decades…this death metal will apparently, never die.