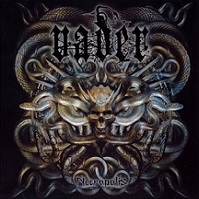 Doubt creeps in when a huge lineup shift threatens the dynamics and chemistry of any band. The doubt can turn into panic though when it’s a long-running veteran death act such as Poland’s Vader. Necropolis features their latest touring lineup on their first studio sojourn with the group, although most ardent followers of the scene will know guitarist Waclaw ‘Vogg’ Kieltyka from Decapitated. Rounding out Piotr’s new lineup are Pawel ‘Paul’ Jaroszewicz and Tomas ‘Reyash’ Rejek on drums and bass respectively.

I should never waver in Piotr’s decision making abilities, as Necropolis aims full throttle from the opening double bass/ snare salvo on “Devilizer” and closes in almost Kreator-ish fashion with the seven minute mid-tempo epic “When the Sun Drowns in Dark.” Even when there can be a brief respite in the action, as the short feedback laden instrumental “The Seal” entails, it’s over in two minutes, eleven seconds before future crowd pit favorite “Dark Heart” rips you limb from limb.

Another quality that defines Vader is the voice of Piotr, as deep and discernable are not two qualities normally associated with Polish metal groups, yet I find this makes the impact of songs like “Impure” and “Anger” that much more forceful. Man, the soloing hasn’t been this fiery and dynamic in quite some years – it’s as if they’ve been studying old Slayer with more technical flash and dash.

I’m sad to say my only disappointment with Necropolis lies in its relatively short duration – 33 minutes can go by so quickly and to have to wait another year or two for the next crushing studio effort makes me impatient. Nevertheless, if you’ve casually been taking a gander at Vader’s latest two or three albums, understand the essential nature of Necropolis now, as they prove The Ultimate Incantation for the 90’s death scene has a parallel for the 2000’s.