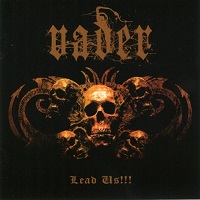 Although Lead Us! contains no new material, it’s pretty kewl, as Vader has always been reliable in terms of churning out something new at least once a year with some odd quirk. This time, it’s the inclusion of three videos – “This Is the War,” “Helleluyah!!!” and “Sword the Witcher” that warrant the purchase or cursory glance of this four song, three video EP.

Vader’s evolution has been marked with a greater emphasis and groove and pounding rhythms, which is none more evident on the excellent and downright brutal “The Book,” which emerges as the best post-David Vincent Morbid Angel track they never wrote. “Die!!!” is a blast-happy affair, with new drummer Daray giving his kit a full-on assault.

A cover of Slayer’s “Raining Blood” is pretty standard (what Slayer cover isn’t?), but the three videos are some of the more visually-stimulating pieces in death metal, especially “Helleluyah!!!” a song that no doubt ruffled a few feathers in Vader’s home country of Poland, a devout Catholic nation.

Now in its 25th year, Vader is a death metal institution. We can’t sugar-coat it anymore than that.