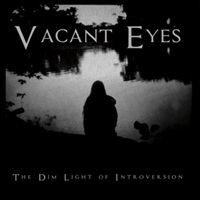 One sub-genre that extends patience for deep, intense value has to be funeral death/doom. When tempos crawl along at measures half the resting heartbeat of elite marathon runners and song-lengths run usually into the eight minute plus region, bands that choose to execute in this particular style need to know gaining a solid following will probably be a slow trek instead of a viral sensation. Hailing from western Massachusetts, the sextet Vacant Eyes originally began as a one-man project from Josh Moran, only to expand over the past few years into a full band and this debut release The Dim Light of Introversion.

The shortest cut “Silent Acquiescence” at 3:40 is an opening instrumental that contains beautiful piano/keyboard passages against equally thoughtful acoustic guitar parts. Josh, Jamie Emerson, and Alex Smith are the axe trio who are able to layer key harmonic electricity while also pushing out clean embellishment on “Indifference”, many of the twin melody choices reaching into classic metal territory while Josh’s growling nature keeps Vacant Eyes on the death path. Twelve minutes of despair, the rhythm section of drummer/keyboardist Chris Kudukey and bassist Grim Gallows Riley building the tension through a number of progressive and double bass nuances to make this one of the highlights – while the sudden keyboard drop at 7:19-7:34 from Mark Richardson adds more aural suspension.

The beauty and depression make “The Cortex” another song that one takes in continuously, drawn out chord progressions giving way to solid choir-oriented keyboards and clean, echoing guitar refrains – the sparseness of the lyrics setting up dark pictures in the mind. Vacant Eyes as a unit understand that you can still be engaging at a plodding pace, and keep building the arrangements in elegance, grace, and sophistication through subtle magnification – a fresh keyboard line here, slightly faster tempo there, or even more engaging guitar layers.

If you enjoy bands like Mournful Congregation, Skepticism, or others from that European/Australian ilk and didn’t think an American band could pull this style off convincingly, well Vacant Eyes is the band to watch for. A new full-length will be on the streets soon, and at 4 tracks/34 minutes The Dim Light of Introversion provides stellar knowledge, musicianship, and execution in this niche market. 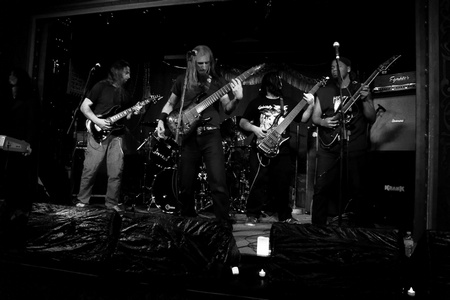