Unwilling Flesh – Between the Living and the Dead (Bindrune/Eihwaz Recordings) 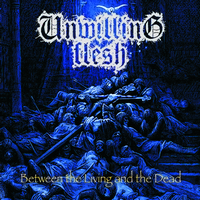 This one reaches out to all the diehard death metal maniacs. With one outstanding debut album, Unwilling Flesh remind us what death metal is all about: a flesh-flaying massacre of mind-mutilating carnage brought to life through music; restless, gluttonous, extremely violent and heavy mayhem. Between the Living and the Dead explores many of the elements that gave rise to death metal and brought it to where it is today, making it an idyllic example of new-age death metal without the effect of too many new-age influences. This isn’t your silly little deathcore, kiddos.

If that chainsaw sound is a turn on, this glut of gnarly guitar riffs and teeth-grinding solos is a thriller. It’s like they never put the trusty n’ rusty chainsaw down, it’s always there shredding or rumbling at some degree. Then there are the terrorizing vocals, an impressively expansive vocal range with a focus on monstrous gutturals and lacerating screams at all the right moments.

“Nightmare Inception” practically defines epically dark death metal; chock-full of howls and growls with a butchering song structure, it is one nightmare you won’t want to forget. The overly theatric intro in “Vanquished Daylight” comes off as a little tacky, especially when that lady weeps, it quickly gets irritating having to listen to that every time the song plays. “Vaults of Eternity” is a chaotic mind-altering oddity. Guitars grind, drums destroy, bass battles and vocals kill with fluctuating ferocities. “On the Wings of Hate” has a good beat with some smooth solos; back in the day when death metal was played more often on public radio, it’d certainly be a song to play. With nine songs just under forty minutes, Between the Living and the Dead has plenty enough to satisfy a craving for razor-sharp, gory death metal.

Did I forget to mention Unwilling Flesh is a one-man death metal army? And he’s a tricky one to track, for he is also Andrieu Contredit d’Arras of Obsequiae, Pohonasin of Nechochwen and Andrew D’Cagna of Brimstone Coven! Andrew D’Cagna, you are one sickly talented fella.