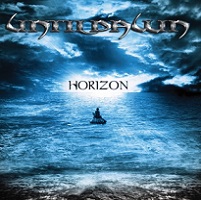 Hey, shouldn’t a skull be on the cover instead of some solitary figure? This is a metalcore album, and such design schematics were such the norm that DR remembers rather vividly Killswitch Engage bassist/artist to the metalcore “stars” Mike D’Antonio imploring bands of this ilk use something other than skulls for their cover art. Granted, skulls are a universal symbol in metal so one can’t fault the bands for wanting to fall in line, but that sort of pack thinking did a lot of those groups in. Canada’s Until Dawn might have fooled us with the cover, but their attempt at metalcore circa 2013 on their Horizon sophomore effort treads a lot of water.

You can concoct any sort of amalgamation from All that Remains to Trivium in Until Dawn’s sound, and while the riff patterns and melodies are true to form (see: “Strings of the Damned”), it’s the vocals of Adam Macleod that are the make-or-break factor. Macleod doesn’t Jeckyl and Hyde it as much as one would think, but his large-in-the-mix clean vocals are often the determining factor in cuts like “The Red Sun Rises This Day” or “Time Tested Fortune,” neither of which have the necessary gusto or Euro grabby-grab that is needed to execute this sort of thing properly.

If Horizon were a metalcore circa 2005 album, then it would have bigger issues than we have indicated above. However (and this is where the positives come in), the album is professionally produced, so for young, unsigned band, Until Dawn has their act straight in at least one department. Perhaps the rest will follow some day…