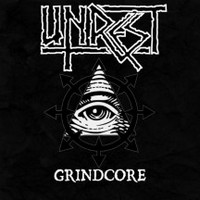 When you see a vanilla-like album title such as Grindcore, it usually goes one of two ways: a rote piece of musical recycling that stems from sheer laziness or a definitive statement of a band that wants to establish their musical identity. Thankfully it is the latter for Philadephia’s Unrest. While the title does clearly show their musical intentions, you may be surprised at the amount of depth present.

Comprised of members of doom up and comers Crypt Sermon and established black metallers Woe (among others), there is a pedigree that the music has to live up to. Again, Unrest succeeds on this front, delivering a deathgrinder of an album sure to appeal to fans of Nasum and Napalm Death. The 12 songs presented linger around the 2 minute mark for the most mark, wearing more of a death metal influence on their sleeves as well as providing a bit more time to make sure each track feels like a song instead a simple adrenaline rush. While opener “We’re Calling You Out” lays the grind down hard, tracks like “Anything to Shock” and “Protest Culture” relent ever so slightly to provide some punishing groove, while “Faith is a Hearse” even goes so far as to develop a dark melodic intro before diving into some blistering grind. There’s even a bit of hardcore urgency present in “Urgent.” It’s these moments that elevate Grindcore above, well, a typical grindcore album and give it some lasting legs.

Packing the obligatory grindcore wallop alongside an enjoyable bag of tricks into a compact 26 minutes gives Unrest a decisive edge among many of the grind enthusiasts. It’s fun, it’s heavy, and more than capable of representing grind for the time to come.