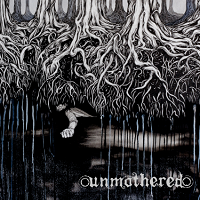 The origins of Unmothered’s unusual name stem from Mexico City, where a friend of the band’s inquired a cab driver on how to best describe the city. The driver proceed to use the word “desmadre,” which translates to “without mother” in Spanish, helping describe the city’s seemingly lost plight…and blight. So it’s a suitable moniker for a band playing a relatively unstable mish-mash of doom, post-metal, and atmospheric metal. It makes for a familiar, but jolting listen on the band’s self-titled seven-song EP.

Somewhere in the cracks between Neurosis at their loudest and Australia’s underrated astral metallers Alchemist, Unmothered’s sound is driven by the guitar work of Matt Walker. Walker, who did time in Lions of Tsavo prior to forming the band, creates instant discord with his use of alien-sounding riff selections, like opener “Gravitons” and the excellent “Solstice,” which as just mentioned, ties into the band’s space-y connection. Forgetting the one-dimensional vocals (they’re mostly black metal-inspired, at least), the rhythmic “Leviathan” and frazzled “Spectre” show that Unmothered have more in them than the usual (and predictable) array of post-metal ideas gone sludge. Actually, we might be under-selling these guys – they’re a more vibrant and interesting alternative to the norm, which at this point, couldn’t be more forgettable. Good stuff that is capable of sneaking up on ya.